Create an Account - Increase your productivity, customize your experience, and engage in information you care about.

Port Isabel is located 35 miles east of Harlingen and 22 miles northeast of Brownsville, Texas. It lies on the eastern end of the Rio Grande Valley at the Brazos-Santiago Pass to the Gulf of Mexico, and about 30 miles 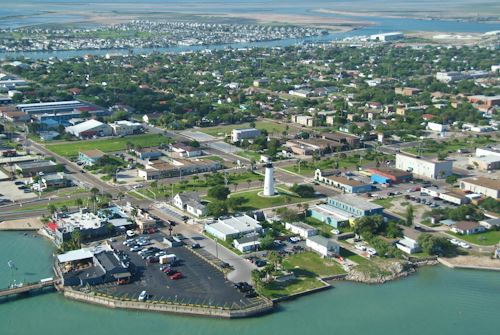 from the border city of Matamoros, Mexico.

Historic Port Isabel, the "Point" of the Laguna Madre Bay, land of history, legend and lore was originally inhabited by the Coahilitecan Indians prior to European settlements. This quaint fishing village's strategic location, once having a 25-foot bluff in the area where the Point Isabel Lighthouse now stands, was a natural lookout for viewing both the Laguna Madre Bay and the Gulf of Mexico. This natural formation was instrumental in the settlement and development of this area and was an important force during the U.S./Mexican War, Civil War, and maritime commerce.

At the beginning, Port Isabel was a cattle ranch owned by Don Raphael Garcia, the first recorded owner of the area, having claimed it in 1829. Then known as El Froton de Santa Isabel, early settlers described the native dwellings as straw huts covered with "raw cattle hides and then recovered with "sachauiste" grass.

During the early 1800s, the Texas coast gained importance to Mexico, the United States, and smugglers from both countries. Local ranchers formed business alliances with pirates who sailed their contraband between the Rio Grande and Corpus Christi. El Fronton de Santa Isabel (Point Isabel) became the base for the growing Port of Matamoros and the privateer fleet.

In 1846, General Zachary Taylor established Fort Polk, a military encampment named in honor of President Polk during the U.S./Mexican War. The fort included one of the largest military hospitals in the United States. Famous individuals including Ulysses S. Grant, Robert E. Lee, and other notable men were stationed at this fort. A year later in 1847, Simon Mussina attempted to establish the city of Point Isabel along the Laguna Madre west of the fort. In 1850, the United States Army evacuated and by 1851, Mussina's attempts failed. 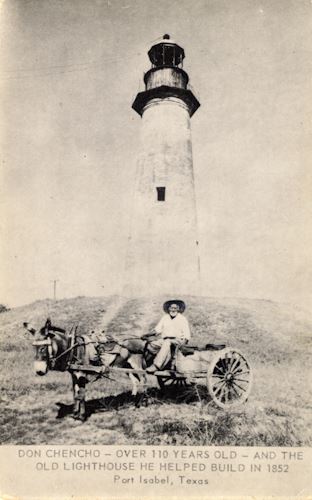 However, in 1850, the U.S. government appropriated $15,000 for the construction of a beacon and lighthouse at Brazos Santiago. Through much controversy, Point Isabel was selected for the lighthouse location rather than Brazos Santiago. By 1851, the customhouse was situated in the former commanding officer's quarters of Fort Polk, and the site selected for the lighthouse was the interior of the main earthen bastion of the Fort.

The Point Isabel Lighthouse was completed and lighted on April 20, 1853 along with the beacon at Brazos Santiago on Padre Island, a square wooden tower painted black. The Lighthouse served as a valuable function as a lookout tower during the Mexican insurrections and the Civil War.

In 1865, Point Isabel lost its importance as a port due to a military bridge having been built from Boca Chica to Bagdad, Mexico, a prosperous shipping town. In 1866 and 1867, bad weather destroyed Bagdad and once again Point Isabel prospered as a port.

In the 1870s, the new Rio Grande Railroad track was installed and businesses were established south of the lighthouse. In 1875, a new town plat was developed and the streets were named by the daughters of Don Raphael Garcia. In the early 1900s, a new railroad linking Corpus Christi to Brownsville along with the sinking of the lighter Luzon at the railroad wharf led to a decline in shipping traffic, and in 1905 the lighthouse was permanently closed.

By 1915, the population of Point Isabel declined to 300. At this time, the Wireless Station, one of the largest radio stations used for the military, was set up southwest of the lighthouse on 22 acres.

In the early 1920s, a new vision for Point Isabel was realized. The Port Isabel Land Company purchased the lighthouse from J.S. Ford of Brownsville, made necessary repairs, and opened it up as a tourist attraction. In 1928, the City was incorporated and the slogan "Building a City where a City belongs" set the premises of changing this small fishing village into a tourist area. Streets were paved, canals were constructed, electric lights installed and industry and mercantile businesses established.

Today, Port Isabel has blossomed once again with many unique shops, restaurants, historic hotels, museums and a lighthouse that make up this historic and colorful area.